Inaccurate theology.  Sometimes it is a conscious choice.  There were times when intellectually I knew my feelings didn’t make sense nor were they based on my understanding of God through Scripture, but something in me felt I had been jinxed with a child on the autism spectrum as a direct result of my past experience with it.  If someone had asked me if this were true, or even if I had asked myself, I might have laughed and said, “Of course not.”   And intellectually I never really believed this, but some latent fear lay brooding, feigning a dormant state, some primordial superstition hid behind a stronger faith that perhaps it was true.  Perhaps if my mother-in-law had never been a special needs preschool teacher with the Department of Defense….Perhaps if I had not known so many people with autism…Perhaps if I had not read so many articles….

My husband and I saw the signs.  We knew what to look for, and we had diagnosed our son ourselves years before we felt the necessity to seek a formal, medical diagnosis.  It was as if all these people and situations were highly contagious and I had now become infected.  If I had not been so well informed on autism, then I never would have given birth to someone on the spectrum.  There.  Fleshed out in a sentence – cause and effect –  in all its explicitness, it looks utterly ridiculous.  And yet…there are times when we operate this way, aren’t there?  If I pray a certain prayer, use special words, God will answer me….If I fall asleep praying, tomorrow will be ok… If I ignore a pain in my chest, it will go away… If I stop thinking about something bad, it will just disappear…. If I think about happy things, I won’t have problems… Have you ever felt yourself reverting back to humanity’s ancient cultural myths?  Out of desperation, helplessness?  The visceral takes over not because we are not intelligent enough, or faithful enough, but simply out of fear.  It is the knee-jerk reaction of humanity to hedge our bets.

Praise be to God for his grace and understanding.  I thank God that he does not always take my every random thought and fear too seriously.  I am thankful that he allows me from time to time to try something on for size, even at my most ridiculous, and gently helps me disrobe and discard the illogical and theologically unsound thoughts.  He provides grace to dress my thinking with something finer, something more beautiful and clearly from him.  An accurate vision, a heavenly help.  Grace in the providential stream of our lives.

Because, of course, the fact is that God did not bless me with a son with Asperger’s because I had accumulated enough autism run-ins, but rather he blessed me with the gift of preparation.  Slowly, over time I was afforded opportunities to learn about people with differences.  My mother-in-law was a huge asset particularly when my son was smaller and guided me through tips on occupational therapy and sensory sensitivities.  As an undergraduate, years before children, my husband and I were employed by Group Living in the tiny college town of Arkadelphia, Arkansas.  (Laugh if you want; the towns exists.)  It is an amazing organization which allows developmentally or physically diabled people to be a vital part of their community.  Group homes are offered for those needing more attentive care.  Regular visits and life-skills training are provided for  those who are able to live independently.  Group Living also runs and operates a very popular breakfast and lunch place called The Honeycomb, serving quiches, sandwiches, salads and American fare.  The Beehive also employs Group Living clients in the second-hand shop similar to  the nation-wide Goodwill stores.  Many of the clients we worked with had autism.  I remember attending as an undergrad a training session on autism.  There, in the mid-90s, I first heard of Temple Grandin and her squeeze box.  I am so thankful for these moments.  And for the wonderful people I worked with there.

One of these people was also my neighbor.  Sammy Landers and his caretaker lived in the apartment below my husband and me.  He was moody, enjoyed being alone, and spoke very little.  Yet he was one of my first encounters with autism.  Sammy is an artist and is featured in this wonderful blog post from last year.  I have one of his pieces which was presented to us as we left Arkadelphia.  It currently hangs above my four-year-old son’s bookcase in his bedroom closet.  Another touch of grace- this one in purple marker.

Honestly, the issues my son struggles with are not severe, just daily.  He is easily frustrated, gets caught up in rigid thinking, becomes easily obsessed with a topic, but also has phenomenal memory, is exceptionally perceptive about others’ feelings, and has a deep longing to be helpful.  Grace has not only given me a greater appreciation for the preparation I have received over the years, but also for my son himself.  What would I change about him if I could?  What would you change about anyone whom you love?  And here is another theological inaccuracy – by God’s grace, my son will be fine.  Perhaps all these careful lessons are not to help shape him, but me.

5 thoughts on “Grace, Theology and Autism” 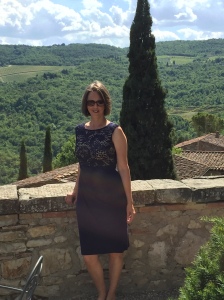