Many of you are busy, taking full advantage of the vast amounts of free time newly at your disposal due to the Covid-19 quarantine. As we shelter in place, one of my friends cleaned out all of her closets. My brother painted his back bedroom he uses as a studio. The neighbors are organizing their garages. I, on the other hand, have had no such motivations. I have been reading several books and have taken our mini labradoodle on even more walks. In other words, life has not been too different, except I do miss my people. I hope you are all doing well, staying healthy, remaining hopeful and loving.

Yesterday, however, something made me turn to my old friend Anna Akhmatova, the Russian poet who suffered under and survived the Stalinist regime. Yesterday was Palm Sunday, a day both joyous and sobering. As we picture ourselves in the story, we cheer with the crowds while knowing the path leads to death. We feel the triumphant victory of Jesus’ humble entrance into Jerusalem, yet know he will be buried by the end of the week. I feel these conflicting emotions in Akhmatova’s poetic laments. They are only the more beautiful as she uses biblical images and biblically-rooted characters to relate both her grief and her hope.

Born in 1889, Akhmatova survived the Russian Revolution and married fellow poet Nikolai Gumilev with whom she had a son Lev. Nikolai was imprisoned and secretly executed by the Bolsheviks. Many years later, in 1935, their son was arrested as an enemy of the state and Akhmatova virtually lived outside of the prison walls in Leningrad (St. Petersburg today) in hopes of catching a glimpse of him, bringing bread, fighting for his release. Although they were estranged at the time of his death, she had lost a husband to the Soviets. She could not lose a son.

It is as this grief-stricken mother she writes the “Requiem” over the next several years each section a part of a cycle of loss, lament and persistence. In this portion entitled “Crucifix” her lament is both human and holy, a grappling for justice when there seemed to be none. Her identification with the mother of the Christ in the hour of deep sorrow seems so honest.

This portion of the poem is beautiful because of its simplicity. In the original Akhmatova employs spare, clean language with an AB rhyme scheme. There is surely a good translation of this work, but I was not happy with the one I found online. I have produced an average translation mostly for the sense and understanding, not really capturing the style. As we approach nearer to Good Friday, I am thankful we have this poet’s perspective on grief. It reminds us that in Christ’s story no one is forgotten.

“Weep not for me, Mother, seeing me in the tomb….”

A choir of angels glorified the great hour,

and the heavens melted in fire.

To the Father he spoke: “Why have you forsaken me?”

The beloved disciple turned to stone.

Yet, there, where the Mother stood silent

To cast a glance that way no one even dared. 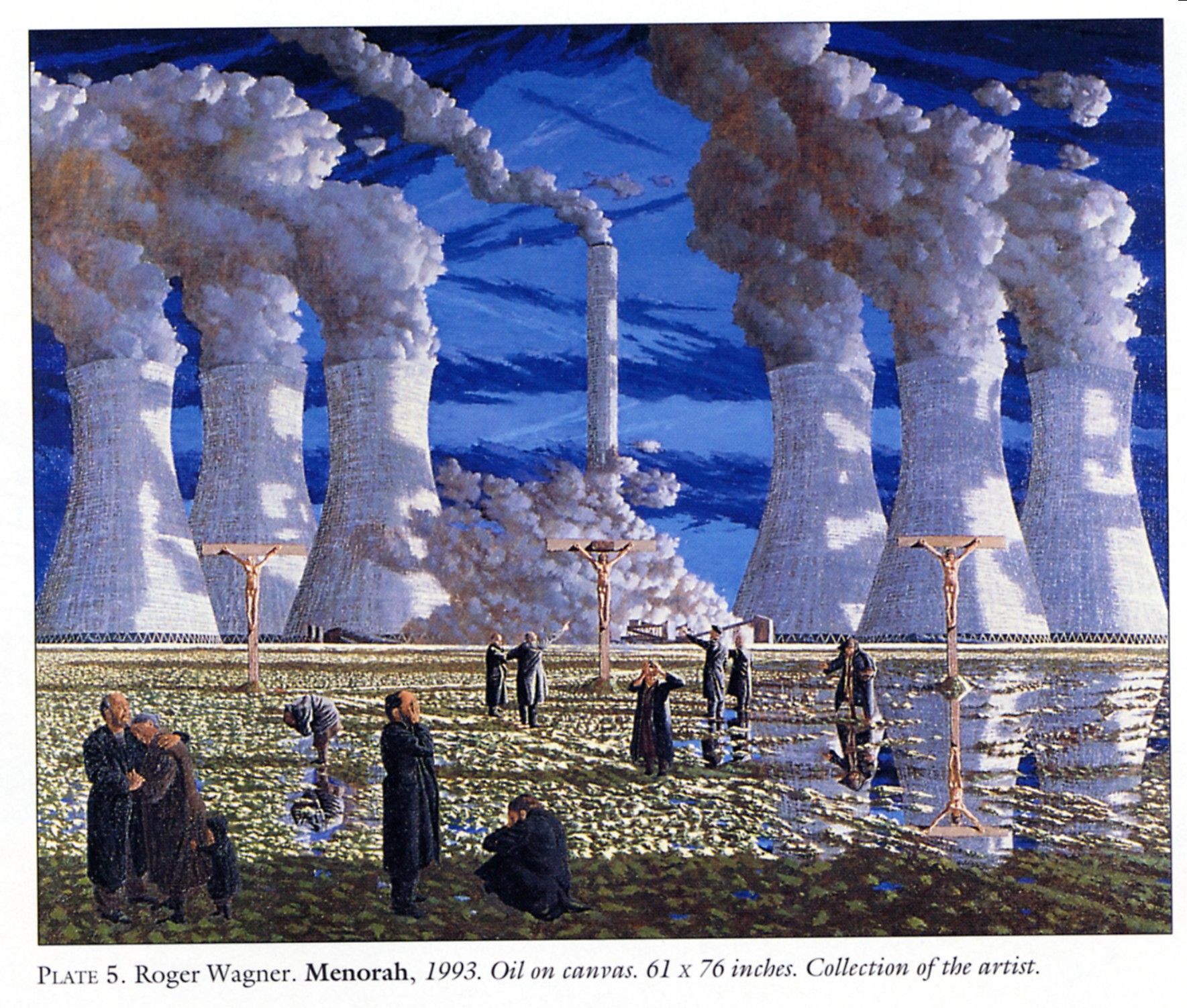 The work above entitled Menorah is by the contemporary painter Roger Wagner, a London-born artist about whom I know little. I discovered his work by a happy accident a few months ago, and am drawn in by the pathos of his works. Honestly, I am not sure how I feel about his style of painting, but I am frequently mesmerized by the content. I find myself entering the painting as one of the figures, or as part of the landscape.

I appreciate the way in which Wagner makes use of biblical narratives. He often places the familiar Bible scene in an incongruent modern setting. Other times, he creates the surroundings squarely in the Middle East. I appreciate the way his paintings startle me into examining them and questioning what they might be saying about history, the Bible narrative, and about God. His startling juxtapositions of characters and locales give his works a more poignant punch. He speaks both theologically as well as artistically.

In Menorah we notice the belching smokestacks in the background and the dark figures in mourning in the foreground. Symbols of the Holocaust and of Christ’s crucifixion all take up space here, creating a jarring sense of something not being quite right. It is an interesting painting to reflect upon with Good Friday approaching.

Here is another one of Wagner’s paintings with the crucifixion as the central theme.  Here, however, we are in a bucolic setting with gently sloping hills in the background. Again, the viewer notices the anachronistic setting with modern telephone poles instead of crosses. Sheep punctuate the bottom of the scene while flocks of birds seem to move all across the top. The sky itself even seems to suggest angels’ wings. We are given the impression of a quiet night, outside of town, and it seems Wagner may want us to remember both Jesus’ birth announcement and death simultaneously.

Both of these paintings, I believe, help us realize that although Easter is a joyous holiday, Good Friday was truly a day of mourning, and could only be called “Good”  retroactively.